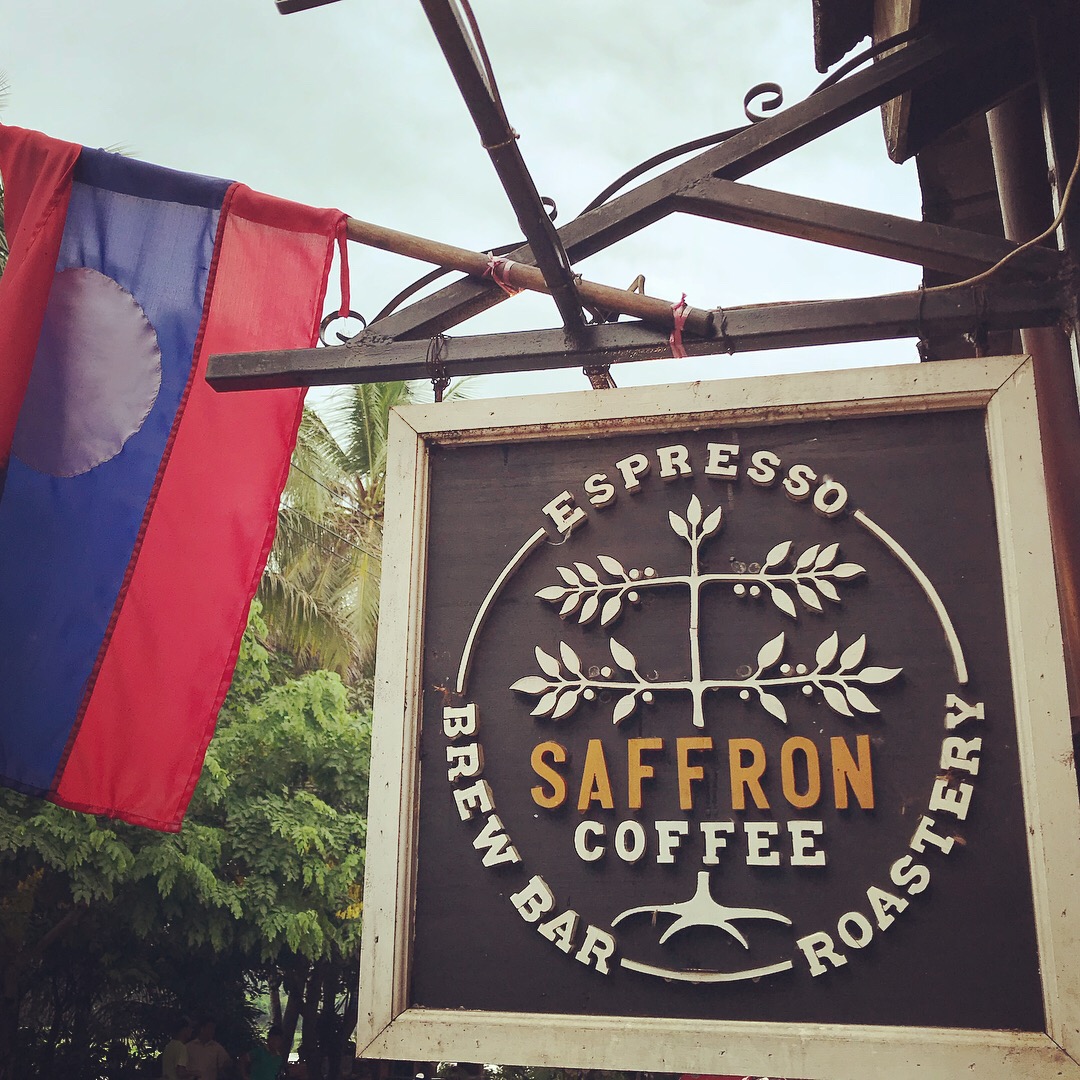 Good coffee is like a good cover band playing in a bar: if it’s good you don’t notice it; you just sit back and enjoy it. If it’s bad, it offends all of your senses and you spend nothing but the entire duration of your coffee (or drink at the bar) noticing how bad it is.

I asked for a refund the other day because my coffee was the equivalent of a very terrible cover song performed in a bar. You see, since moving to Malaysia, I’ve converted to Iced Americanos (iced long blacks) because a) I am, lactose intolerant and b) If I suspect the coffee is bad, a bit of tube ice and sugar syrup help me to endure the bad cover song that is my beverage. On the off chance that a cafe has an alternative to cow’s milk (eg. soy milk) I indulge in a cafe latte – hot! Usually it’s fine and, like a decent cover band, the drink goes relatively unnoticed (except for the much appreciated caffeine kick at the end).

Fun fact: Coffee is considerably expensive when you compare it to other liquids. Sure, it’s not scorpion venom expensive or printer ink pricey but it isn’t cheap. A take-away espresso coffee has become a symbol for white, middle class people with something supposedly important to do. Maybe it’s the power of product placement but if you’re carrying a coffee in a disposable (but not so recyclable – more on that later) cup then you’re in a hurry, but you’re important and have something significant to do with your time (and obviously your money).

Coffee is the fuel for a Gen-Y working mum like myself. My fifty-something year old teaching partner once told me that he loves nothing more than making himself an instant coffee every morning and whilst he stirs his supermarket-bought, generic granulated coffee in his own cup (that he will wash and reuse later), whilst standing in his own kitchen (which he also owns) he thinks about those single origin espresso sipping, smashed avocado on toast eating, mortgageless millennials who will never be able to enjoy the retirement that he faces sipping something probably a little more luxurious than cheap coffee on the balcony of his beachside holiday house. He had a point.

From that day forward (when I was living and working in Australia), I only purchased a coffee on weekends and to reward myself for end of term marking. It felt good. One particular google search of my favourite Australian Demographers – McCrindle – tells me that if I were to buy an espresso coffee every day, I’d spend $1,300 per year. I’m happy to sip my Moccona Classic (milk first) and think about all the things I could do with $1,300.

Not only that, the Australian Broadcasting Commission funded a documentary called “War on Waste” about a year ago which proved to shame the quarter of Australians who buy a coffee every single day. You see, the documentary probed into the recyclability of the take-away coffee cup and discovered that the only thing that can be legitimately recycled is the lid. That’s a lot of land-fill (more on that in my next blog).

This meant that the indulgence and/or necessity of purchasing a cup of espresso coffee every day really played on people’s consciousness in terms of environmental sustainability. People either bought “Keep Cups” that were washed and reused or, in some cases, paid a surcharge for the non-recyclable cup, I’m not sure whether nature benefits from the paltry tip though… After my teaching partner’s quip the death of good coffee began in my life; watching “War on Waste” nailed the coffin on my regular coffee purchases for sure. Never had that Moccona Classic tasted so good.

I know this is a travel blog so I’m going to get off my social commentary soap-box and fast forward to May, 2018, when I visited Saffron Coffee in Luang Prabang, Laos. The average price of a coffee at what many reviewers on Trip Advisor deem to be LP’s best café, is 17,800 Kip (about AUD$2.80) – cheaper than the price of a good coffee in Oz. Not only did my coffee (or coffees – I bought many) go down unnoticed like a good cover band, I felt good drinking it, knowing that I wasn’t just padding some rich guy’s pockets. 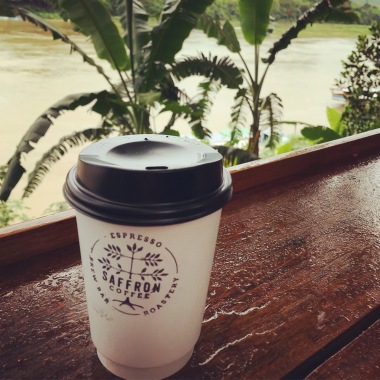 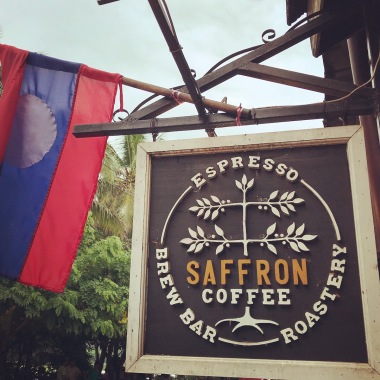 Some reviewers (who don’t get it), complain how expensive the coffee is at Saffron but I suspect they are unaware of what drives the social enterprise which is “profit for purpose”. Yep, that’s right, Saffron Coffee (named after the brightly coloured attire of the Monks in Luang Prabang) has a vision for farmers living in Lao to “grow themselves out of poverty.” The profits made in the café in town go directly back to the farmers out in the provinces who, have taken a risk and decided to grow something other than rice or other traditional crops, and have received assistance, education and support to venture into shade-grown coffee. Not only is this business model benefiting farmers, it is also far more environmentally friendly than the slash and burn agricultural methods used in Laos.

I met up with Derek, the General Manger of Saffron (who happens to also be a former colleague of mine). He has moved his family of five to live on the jungle’s doorstep with his sights set on helping one of the poorest nations in Asia literally from the ground up. Derek has been asked to speak to other NGOs about Saffron’s successes. He advises people in the public and private sphere about making Laos a better place. I was so inspired by his willingness to leave the comfort of Australia to embark on an incredible journey with his family. Not only that, Pip, his wife, is homeschooling their three kids. If anything, a weekend with this family made me realise how much we, as a family, have to be thankful for.

How many of these coffees did I buy? Quite a few – and even more than one per day. The greatest beverage I had was an iced latte on soy milk – sitting beside the beautiful Mekong River on the cafe’s outside deck. I would have paid double or even more, knowing that my money wasn’t just saving the environment or the economy. It was saving lives from poverty, one cup at a time. 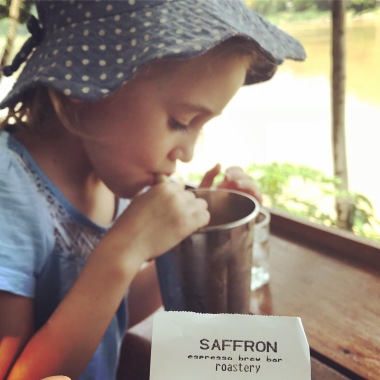 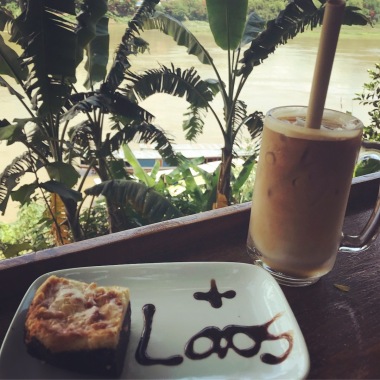 You can purchase one coffee tree for a farmer in Laos for just USD$1 see: https://saffroncoffee.com/